Prince from a Nearby Land 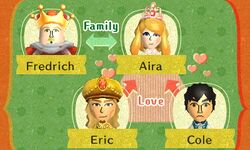 It has been requested that image(s) be uploaded and added to this article. Remove this notice once the image(s) have been uploaded and applied.
Reason: In-game screenshot

This section is incomplete. You can help MiiWiki by expanding it.
Cast quote

The Prince from a Nearby Land is an extremely arrogant NPC in Miitopia. He is technically a traveling companion after the King asks the party to bring him to the castle (due to being engaged to the princess in an arranged marriage), but is incapable of actually doing anything in battle. When the party gets to Neksdor, he frees the Genie of the Lamp and can later be found crying in the desert.