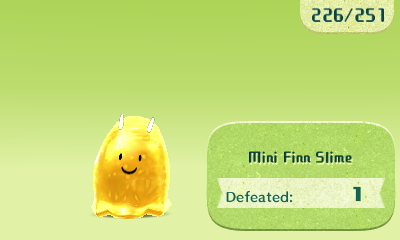 A Mini (Sassy Child) Slime in the journal

Mini (Sassy Child) Slime is a Boss Monster fought in Miitopia. It is the first monster and boss the player faces, and it serves as a tutorial on fighting. It looks like a large, yellow, and jiggly blob. It holds an entire Mii face. After the Dark Lord's attack on Greenhorne, the Worried Mother pleads with the player to save her son, giving the player the Antique Charm. The player leaves the town and discovers the Dark Lord. The Dark Lord shows the player the Sassy Child's face, only to attach it to the slime. The player is unable to help, and begins to panic, until the Antique Charm glows, and then the Guardian Sprit appears and gives the player a choice of six Jobs. With the player's new job, they are easily able to defeat the slime and rescue the Sassy Child's face. The Worried Mother gives the player 200 gold when they return to Greenhorne. The slime is also fought as a quest in the Travelers' Hub, this time called "(Traveler) Slime".