From MiiWiki
Jump to navigationJump to search
Rock Moth 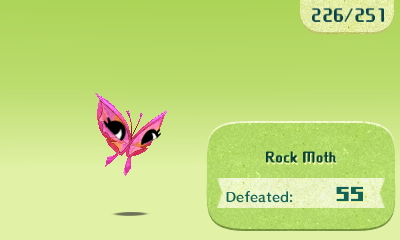 A Rock Moth in the journal

The Rock Moth is the first normal Monster fought in Miitopia, serving as a tutorial of sorts. Although it has low health, it deals a fair amount of damage. It appears to be a pink crystal butterfly, although it is called a moth. It has a pair of Mii eyes on it's wings, as some real butterflies have eye patterns on their wings. When killed it releases the Mii eyes.

Rock Moths (and Poison Moths) are referred to internally using "butterfly" despite being called moths in-game.[1]