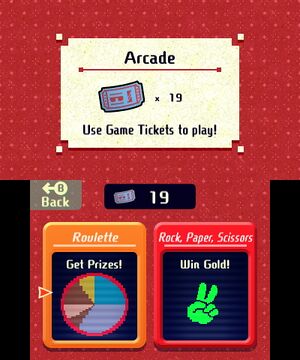 The Arcade is a mode in the Inn in Miitopia where the player can spend their earned Game Tickets to play minigames. Both minigames, Roulette and Rock, Paper, Scissors, are available from the start. The Arcade is a good way to earn gold and EXP quickly without having to set out. It is the only place in the game where Game Tickets are spent.

Roulette is a minigame where a Game Ticket is spent to spin a wheel of random prizes. Each time the player enters an Inn, the prizes will be different. There are four categories of prizes on the wheel, and while they stay the same, the size of each category on the wheel varies. The Gold Prize (yellow) consists of either the next-best Equipment, or Ragged Equipment. If the player already is at maximum level equipment for their current Job, the prize will be 10 HP Bananas. The Silver Prize (blue) is either EXP or Grub. The EXP will come in three sizes: "A Morsel", "A generous helping", and "A royal portion", in ascending order. The Grub can be any type, including rare and very rare versions, and will be three servings of the food. The Bronze Prize (orange), is Jolly Jaunt Tickets. These are tickets only earnable at this game, and take any chosen player and their roommate on an excursion. The roommates will earn relationship EXP, the amount depending on if the ticket was for a Budget, Fancy, or Luxury jaunt. If the chosen player's roommate is ill or currently in a quarrel, or has no roommate at all, the ticket will be sold for 500G, 100G, or 1500G, again depending on the type of jaunt. In the Nintendo Switch version, three Outing Tickets to random locations can also be earned as Bronze Prizes. The Runner-Up (gray) prize will either be an HP Banana or an MP Candy. Every time the player reenters the Inn after an outing, the wheel will be different. If the player attempts to change the wheel by other means such as restarting the game, the ticket may be lost with no prize gained.

In Rock, Paper, Scissors, the player spends 1 ticket to challenge a small robot to a round of Rock, Paper, Scissors. Winning earns an amount of Gold, dependent on how far the player has progressed into the game. After a win, the player can either leave with their winnings, or bet it all to get double the winnings if they can win another round. The maximum amount to win is sixteen times the original amount, as after the fifth round the player is forced to leave. Losing at any time will result in all rewards being lost, and another ticket is required to replay.