It has been requested that image(s) be uploaded and added to this article. Remove this notice once the image(s) have been uploaded and applied.
in-game screenshots from after the battle

Dominic is a supporting protagonist in Miitopia. They first appear in the Dark Lord's castle in Karkaton as seemingly the penultimate boss of the game, being known simply as Dragon. After the battle, they become calmer, revealing a lighter color scheme and nicer personality. They then apologize for their actions and go to sleep. After the Dark Lord is defeated and the Great Sage becomes the Darker Lord, they offer to help the party with their next moves. They then fly out of the castle with the party in tow and tell them about the Traveler's Hub, a center for adventurers. Afterward, they can be used as a fast travel method to go to the beginning of any region, along with being the only way to go in or out of the Traveler's Hub, Powdered Peaks, Peculia, Nimbus, and The Sky Scraper. 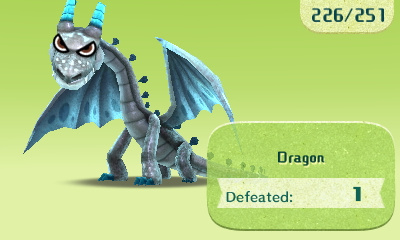 A Dominic in the journal

This section is incomplete. You can help MiiWiki by expanding it.
Does it have a basic attack, and if so, percentages for it and fire?