It has been requested that image(s) be uploaded and added to this article. Remove this notice once the image(s) have been uploaded and applied.
Reason: Screenshot of the actually explorable part 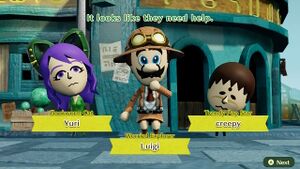 The Traveler's Hub is the fifth area in Miitopia. It is unique from the other areas in that it consists entirely of a single hub area, with no explorable levels or map. The Town Guide and various other Miis with personalities besides the standard ones and standard Jobs (or alternatively specific Cast members) appear as NPCs. All Miis but the Town Guide give out quests, and some may be recruited as party members after their quests are completed. Rewards for these quests are Gold, Grub, Game Tickets, Outing Tickets, or Equipment.

The player is asked to go to a temporary area added on to an existing region for the duration of the quest and defeat the boss there.

If one of these is given by the Worried Explorer, then the dungeon boss will always be a Snurp and Snurps will always appear on the area map.

Same as standard quest but the Mii giving the quest joins the party as long as that quest is active. However, they can be taken into areas besides the one that the quest is in. The Mii being escorted may have their face attached to the boss of the temporary dungeon, in which case they will not be available as a party member for that battle.

If one of these is given by the Youngest Fab Fairy, the reward will always be a "sweet" Grub and their face will not be attached to the boss.

The player is asked to give an item to a Mii found in a hub area. The pool of items and levels of reaction (but not dialouge) are the same as those in the gift Inn event.

Only given by the Quizmaster, this is similar to standard quests, but the only features in the temporary dungeon are the Quizmaster, with the final one always being Quiz Remix (every question is from a random quiz).