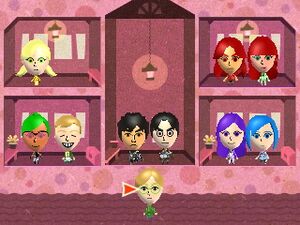 The inside of an Inn

Inns are buildings located in various places around Miitopia. They serve as checkpoints as well as places for Miis to restore HP and MP. There is an Inn at the end of every path, except those leading up to final Bosses, even if there is no reason for the Inn to be there. The scenery outside the windows, background when picking a room, and room layout/decorations all vary depending on the region it is in. They contain 5 rooms that hold two Miis each, plus a stable that holds the horse and one Mii in the Switch version. The Inn can only hold 10 Miis at a time. While in the Inn, Miis may want to see other Miis (represented by a thought bubble) or talk to their roomate (represented by three dots). In addition, the player can give Miis Gold to spend, have them Eat Grub, play at the Arcade, or, in the Nintendo Switch port, go on Outings.