This article is about the island from both Miitopia games, and should not be confused with the game by the same name it appears in. 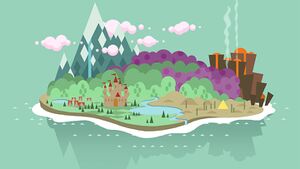 Miitopia is the name of an island located in the Miitopia universe and the setting of the game itself. It is composed of 12 distinct regions that are unlocked over the course of the game. Towards the middle of the game, an interactive map of Miitopia is unlocked so that players can quickly travel from one region to another.