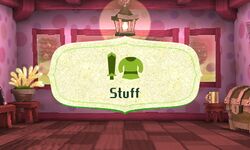 The screen that appears when Stuff is selected from the menu.

Stuff is the name of equipment in Miitopia. It comes in two types: clothing and weapons. With the exception of amiibo clothing, each job can only use that job's Stuff. (The two different Pop Star variations can use each other's weapons, but not clothing.) The appearance of Stuff can be changed independently of the stat boosts from it, and if doing so, headgear and bodygear can be changed independently. (Headgear can also be cosmetically removed.) Stuff can be bought from the catalog, but only after it is obtained. Stuff can be obtained through a Mii buying it at the Inn, teasure chests, Traveler's Hub quests, and roulette (the last of which is also the only way to get ragged clothing). All clothing has alternate colors (except for default clothing and all amiibo clothing except for Yoshi, Toad, Inkling Boy, Inkling Girl, Squid, and Samus).

amiibo clothing is purely cosmetic and can only be obtained from the Nintendo Fan.