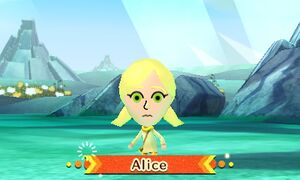 The Hero is introduced.

The Hero is the main player character in Miitopia. They are created upon starting the game and are the first character introduced. They start out as a normal Mii (described in-game as "a simple traveler"), but the Guardian Spirit in the Antique Charm gives them special powers, including a Job. In battle, they are the only Mii directly controlled. Outside battle, they are the controlled Mii unless they are not in the party. They are the only Mii capable of learning the Horse Whispering skill.