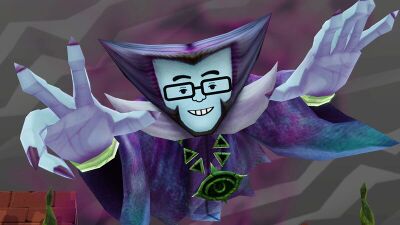 The Dark Lord appearing in the introduction to Miitopia.

The Dark Lord is the antagonist of the first half of Miitopia. They first appear in the game's opening as the evil being that stole all the Mii faces to create monsters. Halfway through the game, the player defeats them in battle, revealing them to be a regular Mii that was possessed by the Dark Curse. Before they became the Dark Lord, the Mii had once worked in an HP Banana factory. Tired of their regular routine, they found a cursed box that coaxed them into opening it in exchange for powers. After opening the box, the Dark Curse was able to possess the Mii and become the Dark Lord.

After the boss fight, the Ex-Dark Lord attempts to aid the party in The Sky Scraper by making very weak attacks and providing HP Bananas, hoping to atone for their previous actions. They do not follow the party into the Otherworld, saying that it is too dangerous for normal Miis to even go there. They then get a job warning people about the dangers of New Lumos.

It has been requested that image(s) be uploaded and added to this article. Remove this notice once the image(s) have been uploaded and applied.
Ex-dark lord

The Dark Lord takes the form of a large floating being. Their skin is light blue and their head consists metallic purple mutton chops that seem to merge with hair that juts back in a V-shape on the scalp of their head. Their body is made of a large, purple, torn cloak with two large, gray tuffs that make up their collar. They have two large, purplish-blue hands with claw-like purple fingernails. On each wrist, they wear two gold bracelets. Most importantly of all, they wear a large golden necklace with triangle-shaped chains and an eye-shaped pendant. From this pendant is where the Dark Curse's power resides. The only thing that they keep from the original Mii assigned to the role is the face.

As the Ex-Dark Lord, they will take on the rest of the traits of the assigned Mii and actually look like a human. The hat they wear is the same shape as the hairstyle from their previous form, and their shirt is similarly torn on the bottom as was their cloak before (however, they have a large white verticle stripe stitched in the front). They wears white pants and brown shoes.

A Dark Lord in the journal.

This section is incomplete. You can help MiiWiki by expanding it.
Percentages, doesn't look like the param info sheet has them for face steal and basic attack