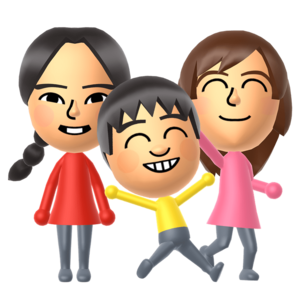 A group of three Miis.

Miis are customizable avatars featured in a variety of Nintendo games. Debuting with the release of the Wii, Miis have been present in every Nintendo platform since.

The idea of implementing character creation in a Nintendo console started with game director Shigeru Miyamoto, who insisted for years that a game be released involving the ability to recreate existing people.[1] According to Shigeru Miyamoto, the personal avatar concept was intended as a demo for the Nintendo Entertainment System (NES), where the player can draw faces onto an avatar but the concept could not be turned into a game so the plan was scrapped. [citation needed] At one point, Nintendo SPD was coincidentally working on a similar game involving faces.[1] So, the teams involved in these two separate projects were put together to develop what would eventually become known as the Mii Channel.[1]

In every Nintendo platform since the Wii, the means of creating, storing, and sharing Miis is slightly different.

The first Mii maker was the Mii Channel. Miis stored on the Wii console walk around a white, tiled void and sometimes interact with each other. When the player selects the Create Mii button, they are taken to another screen where they can being choosing the gender and appearance of their new Mii.

Users have an option to "favorite" Miis, giving them dark red pants.

While the Nintendo DS does not have a built-in Mii creator, two games on it did have this function

Personal Trainer: Walking allowed users to either create Miis or import them from their Wii. These Miis are used to represent the player in the walking exercises featured in the game. The Mii creator is set in an yellowish area this time, with the customization features selected on the bottom screen.

Tomodachi Collection allows players to create Miis that can live on an island. The Mii creator is very similar to the one in Personal Trainer: Walking, but now options for voice and personality are added.

Mii Maker is essentially a smaller version of the Mii Channel: Miis stand on a similarly tiled void and can walk around, but they do not interact with each other. Additionally, to accommodate for a smaller screen, only up to 10 Miis can be shown at a time (the bottom screen has arrows to flip between different slides of Miis).

Mii Maker adds several facial features from the Mii Channel. Additionally, users can use the 3DS camera to automatically make Miis based on one's image or scan a QR code for someone else's Mii.

New version of pants are introduced with the 3DS.

Miis can also be used as profiles for Streetpass.

Being the sequel to Tomodachi Collection, Tomodachi Life has the same Mii creator with the same music. However, the option to share Miis via QR codes is introduced. Miis could be imported from the Nintendo 3DS itself as well.

For Miitopia's Mii creator, the Mii is placed in a yellow void with animated waves flowing all around. 24 additional colors were added for hair, eyebrows, eyes, and lips, many of which can be considered unnatural or dyed colors. The song that plays appears to be a remix of the original Mii Channel theme. Miis could be imported through multiple means: Mii Central (a built-in database of popular Miis), the 3DS Mii Maker, Tomodachi Life save data, friends' systems, or from QR codes. Miitopia also has a personality system like Tomodachi Life, but it is much simpler and consists of 7 instead of 16 personalities.

The Nintendo Switch port of Miitopia adds makeup and wigs, features that can modify a Mii's head that can only be used in that game. It also allows the sharing of Miis online through access codes or the user's friend list.

The Wii U's Mii creation app is very similar to the 3DS's. For starters, it is also called the "Mii Maker," and it allows users to create Miis from photos or import them from QR codes. They can also be sent and received to nearby Wii and 3DS systems. The Mii is a greenish-blue void this time, and are placed on the left while facial features are on the right.

Instead of storing them in a separate app, Miis are placed in WaraWara Plaza, the home menu of the Wii U. Additionally, popular Miis from Miiverse communities would show up back when the service was still active.

The Nintendo Switch Mii creator is the first and only Mii creator in a Nintendo console that does not feature a plaza. Instead, Miis can be viewed via a menu that can be located in the System Settings. It is also the first creator to not have any music.

The Mii creator is a lot more simplistic than previous installments. The Mii is placed in a light gray, sparkly background. To the left of the screen, the customization features are listed with words and icons this time. When the colors for hairstyle, eyebrows, eyes, mouse, facial hair are selected, there is an option to show 100 more colors, many of which are unnatural for humans.

When choosing a look-alike to start from, the user must select the gender of the Mii first and then 18 seemingly randomly generated Miis will be shown.

Retiring the usage of QR codes for Miis, the Nintendo Switch allows users to send and receive Miis by connecting the console to nearby users. Currently, the only way to share Miis online is through Miitopia's access key system.

While the Switch version of Miitopia has a creator that is identical to the console's, there are two new features introduced: Makeup and Wigs. Makeup allows the player to add up to 100 shapes to their Mii's face, allowing for even more customization. Wigs replaces the Mii's hair with a wig the player can create by combining bangs, backs, and cowlicks, along with a two different hair colors and accessory colors when applicable.

Replacing QR codes from the 3DS version, the Switch version allows players to share Miis via access codes. Each code is unique for each save file, and by sharing it other players can have access to all the Miis from that file (except for ones made private), along with any wigs and makeup they have on. Players can also import shared Miis from the game into the Nintendo Switch itself, however makeup and wigs will not carry over.

In Miitomo, players could create Miis via camera or from scratch. QR codes from the Nintendo 3DS and Tomodachi Life could imported as well, and Miis from My Nintendo could be added too. This time, the Mii was placed in a light blue gradient background. It used a similar personality quiz to Tomodachi Life, albeit a bit more advanced. While the game focused on the player's Mii, additional Miis could be made and stored on the app as well.

Mii Studio is the Mii creator for My Nintendo, and the first official browser-based Mii creator. It was made to replace the now defunct Miitomo.[2] Mii Studio is very similar to the Nintendo Switch Mii creator due to fact that users can import their Mii from their Nintendo Network ID and it features no music. No new facial features are added. 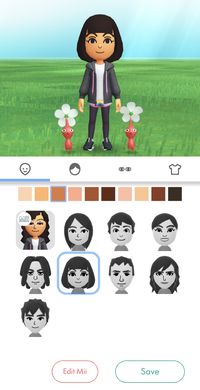 Miis are featured in the Nintendo mobile game, Pikmin Bloom. The Mii maker in this game is very limited, as there are only several presets to chose from. Players can, however, change their Mii's skin, hair, and eye color, but only natural color options are available. To access more options, players must edit Miis via Mii Studio and then import them into the game. If the player signs in with their My Nintendo account, the Mii associated with their account will be the first available preset to chose from, and they cannot edit skin, hair, or eye colors within the game. There are also 9 outfits to chose from for the player's Mii.

The main usage of Miis is as characters in Nintendo games, either as the main characters, such as in Wii Sports, or as extra customizable characters, like in the Super Smash Bros. series. Sometimes, their faces can be used as masks, like in Animal Crossing: City Folk.

Miis have also been used as ways to identify Nintendo users. For example, My Nintendo accounts use Miis as a form of profile picture. Additionally the Nintendo 3DS requires a Mii to represent the owner of the console. For the Nintendo Switch, users can use pictures of select Nintendo characters and images as profile pictures, but they have the option to create a Mii and select a pose for it.