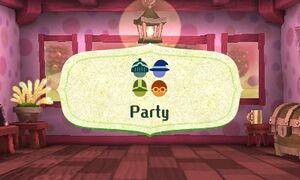 The pop-up that appears when viewing the party in the Inn.

Differences from the Hero