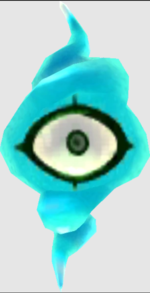 It has been requested that image(s) be uploaded and added to this article. Remove this notice once the image(s) have been uploaded and applied.
human form

The Dark Curse is the primary antagonist of Miitopia and the source of the Dark Lord's powers. They are a blue wisp with a single eye.

Prior to the events of the game, they were a normal Mii that was ignored by society. They concluded that their face was the reason they were neglected and cast it off. Without a face, they became a spirit only capable of flying, posessing Miis, and speaking telepathically. They eventually became resentful and were then sealed away. The box they were sealed in came to an HP Banana factory, where the Dark Curse told the to-be Dark Lord that opening the box would give them power. They opened the box, getting possessed and starting the events of Miitopia. After the hero defeats the Dark Lord, the Dark Curse is separated from them and tries to possess the hero. The Great Sage steps in front of the hero, being possessed instead and creating the Darker Lord. After the hero beats the Darkest Lord, the Dark Curse is separated from the Great Sage. The Great Sage then traps the Dark Curse in a magic bubble and explains their history. After this, they ask the hero if the Dark Curse should be destroyed or set free. If the hero chooses to destroy it, it thanks the hero for ending their pain as it is destroyed. If the hero chooses to set them free, then the player is prompted to give them a face in the Journal and the Great Sage restores their body. They then become the Great Sage's apprentice and their only further plot relevance is unlocking the Tower of Dread.