From MiiWiki
(Redirected from Darker Lord)
Jump to navigationJump to search 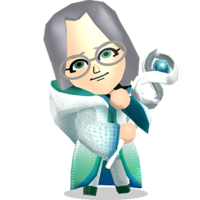 It has been requested that image(s) be uploaded and added to this article. Remove this notice once the image(s) have been uploaded and applied.
Darker, in-game screenshot for darkest

The Great Sage is a major supporting character for the first half of Miitopia. They appear in several cutscenes providing words of support for the Hero throughout the adventure. They sealed away the Genie of the Lamp prior to the events of Miitopia and kept the Magic Lamp until they dropped it in the desert, where it was picked up by the Prince of a Nearby Land and later the Hero. The Great Sage joins the party in Karkaton after finding the first three faceless team members and leaves after defeating Cerberus. While the Great Sage is known to possess great power, they claim to hold back during their battles so that the Hero can learn to be strong on their own. While accompanying the hero, they use Tower of Flame, Cure, and a single-target version of Lightning.

After defeating the Dark Lord, the Dark Curse possesses the Great Sage, turning them into the Darker Lord. The rest of the game then focuses on defeating this new villain in order to rescue the sage. During the final battle, they transform into the Darkest Lord by absorbing faces. When the evil is finally defeated, the Great Sage gives the Hero the options to break or save the corrupted soul that was left behind. If the soul is saved, the Mii that is recreated from it becomes the Great Sage's apprentice, as shown in the end credits.

The Great Sage's skin color and face depend on the Mii that is cast for the role. For their clothes, they wear a thick white robe with turquoise gradients on the bottom. The inside of the robe is jade. They also wear white pants and green shoes. The Great Sage always wields a silver staff that is roughly 3/4 of their height. The staff is composed of a simple shaft with a structure on the top that resembles an infinity symbol with an orb on the top loop.

As the Darker Lord, they have a very similar robe, but use a dark-colored staff with an eye motif on the top instead of the infinity symbol. In addition, they float instead of walk. Their face also becomes blue.

As the Darkest Lord, they appear to be made out of gold, and have just a face (itself contained in a ring of spikes) and disembodied blue hands that disappear at the golden spiked wrist cuff. The staff also becomes larger and made out of gold with a spiked ring as a tip.

The Darker Lord appears on the map as a static encounter in the Otherworld. Engaging them requires 10 party members, with 3 to fight each of the hands and 4 to fight the face. As such, they can only be engaged if the Inn is full. Any sick Miis will recover in order to fight them. In the Nintendo Switch version, the Horse is present for all three battles. The hands are fought first. After the hands are defeated, the Darkest Lord steals the faces of the 6 teammates that fought the hands, turning them into (Teammate) Coins for the final fight. They have a special animation upon transforming from the Darker to Darkest Lord and another one upon being defeated.