From MiiWiki
Jump to navigationJump to search
Nintendo Switch Sports 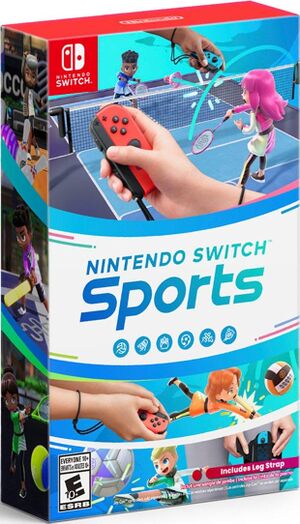 Nintendo Switch Sports is a game released in 2022 for the Nintendo Switch in the Wii Sports series.[1]. Online play is available. An online play test was available at specific times from February 18th, 2022 to Feburary 20th, 2022.[2]

The location for this game is Spocco Square.

Nintendo Switch Sports consists of three different multiplayer modes: Play Globally, Play Locally, and Play with Friends. In each mode, players can chose one of 6 sports to play: Volleyball, Badminton, Bowling, Soccer, Chambara, and Tennis. Golf is planned to be added on November 28th.[3] There is also an option to randomly select sports to play. All sports use the Joycon's motion controls. The player uses the controllers to perform actions similar to the real-life counterparts of these sports, such as using the remote as a tennis racket or a sword. When playing a sport for the first time, the player will be up against CPUs instead of real players, even if they're online.

This is the first game in the Wii Sports series where characters other than Miis are playable. They are called Sportsmates and are the default characters in the game that make up the NPCs in the backgrounds of each locations. At release, Miis were only available as an optional body type for players, but as of the version 1.2.0 update Mii CPUs could be unlocked by holding L + ZL or R + ZR while selecting a difficulty for any particular sport in offline modes of the game. Matt is unlocked when the player does this on Chambara with Powerhouse difficulty.

There are three different modes of this game. It is not possible to play with more than one player in Tabletop mode. When attempted, a message will pop up instructing the player to use the Nintendo Switch in TV mode.

Play Globally is the main mode of this game, though it requires a Nintendo Switch Online membership to access. It can be played with up to two players locally, while the rest of the players encountered can be from around the world. As players play sports, they can earn points that can be used to exchange for items. Every 100 points allows players to draw for a randomly selected item in a limited-time collection they chose. The items that can be gained are outfits & accessories, titles, stamps, and equipment. After getting a full set in each collection, players win a completion bonus set, which includes outfits & accessories and equipment. Frequent disconnecting during matches temporarily blocks the player from this mode.

If players do not have Nintendo Switch Online, selecting "Play Globally" will start Trial Mode. Trial mode uses CPUs for all the competitors that would have been players found online. Players using Trial Mode can only get up to two items per week however.

Pro League is the ranking system in this game. After playing 10 online matches of particular sport, the player gains access to that sport's Pro League. Players start at the lowest rank, Rank E, and move up or down as they win or lose matches respectively. Frequent disconnecting during matches deducts points necessary to move onto the next rank. The ranks in Nintendo Switch Sports are:

Ranks S and ∞ were added in the version 1.2.0 update. If the player shows great success in their rank, they may get matched with players in ranks above them.[7]. Soccer players are assigned based on the average win rate of all members, so a variety of ranks may be represented during matches.

Play Locally is another mode in Nintendo Switch Sports. It supports up to 4 players locally, though single player modes of each game can be accessed through this mode. Players can choose the difficulty of the CPUs they will face, with three options called Normal, Strong, and Powerhouse.

Play with Friends allows for up to two local players, but up to a maximum of 8 players in a room. This game allows for players to host rooms with their friends. It requires a Nintendo Switch Online membership to join or create rooms. Hosts can set a password for the room and enable voice chat as well (voice chat requires the Nintendo Switch Online smartphone app). As of version 1.2.0, friend matches can be joined using a Room ID.

Different sports have different requirements in order to make them playable in Play with Friends: Badminton, Chambara, and Tennis need exactly two Nintendo Switch systems, Volleyball can be played with only up to 4 players, and Bowling and Soccer can be played with up to 8 players. Each player needs two Joy-Cons to play Soccer.

Exclusive to Nintendo Switch Sports is a gacha mechanic called "Items". As players play sports, they can win points. When a player wins 100 points, they can exchange it for a free item in a collection of their choice. Collections run for a limited time, and multiple collections can run at the same time. After collecting all items in a collection, players can win a Completion Bonus, which is a set of even more cosmetic items or even a new body type.

Nintendo Switch Sports started out as an entry in the Wii Sports series. It initially had no motion controls. Before the design of Sportsmates was finalized, multiple character designs were proposed, including round characters with no arms similar to Miis, college students, and robots. Spocco Square also had multiple designs, including an intercollegiate sports stadium and an ancient Olympian stadium, but was redesigned into the final gym-like structure to make it more welcoming to casual players.[8]