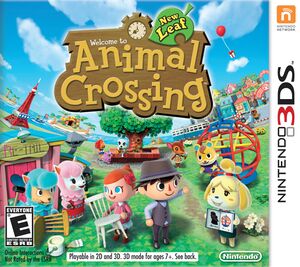 Animal Crossing: New Leaf is a simulation game for the Wii released in Japan in 2012, followed by Korea, North America, and Europe in 2013. It was developed and published by Nintendo and is the fourth mainline title of the Animal Crossing series.

In this game, the player can go to Shampoodle and ask for a Mii mask to be worn on their head. Shampoodle must be unlocked in this game after spending 30,000 Bells at Able Sisters or Kicks and after 10 days has passed since Kicks has opened. Getting a Mii mask is free at first use, but will cost 3,000 Bells afterwards and only one design can be used at a time.

Using a Mii mask will automatically change the player's shade to match that of the Mii. Any headwear, hats, and/or accessories that the player is wearing will be removed while wearing a Mii mask. The Mii mask is capable of displaying emotion, such as whenever the player falls into a Pitfall Seed.

List of games Miis are playable in
Retrieved from "https://miiwiki.org/w/index.php?title=Animal_Crossing:_New_Leaf&oldid=4134"
Categories:
Hidden category: