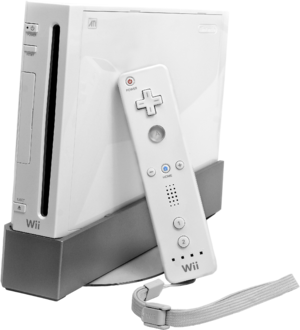 An image of the Wii

The Wii is a video game console made by Nintendo that was released in 2006. It is the successor to the Nintendo GameCube. It is the console where the Miis originate from. In every region of the world (except Japan) the console was bundled with Wii Sports.

The Wii sold 101.63 million units worldwide, beating its competitors the Sony PlayStation 3 and Microsoft's Xbox 360, and held the title of being Nintendo's best selling home console up until the Nintendo Switch surpassed it in 2021 by selling 103.54 million units.[1]