From MiiWiki
Jump to navigationJump to search
Golf 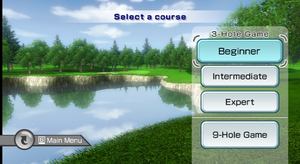 The main menu of the Golf mode in Wii Sports

Golf is a sport appearing in Wii Sports, Wii Sports Resort, Wii Sports Club, and Nintendo Switch Sports. The object of the game is to hit the ball across the course and into the hole with one of the four different clubs. The rules are similar to that of real-life golf, but simpler. 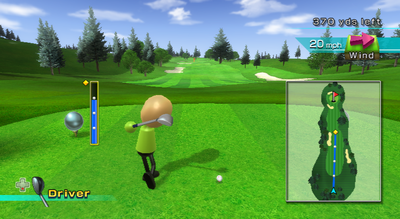 The main objective of golf is to hit the ball into the hole in the fewest shots possible. If the player is to hit the ball out of bounds, or into the water, they must try the shot again, with a one shot penalty. If the player takes 3 times the par in strokes, they will be forced to give up, keeping their current score, either a +6, +8 , or +10. -22 is the theoretical best score, although technically not possible because the ball is usually too far for any club to get it to the hole in one shot. The maximum legitimate skill level achievable for golf is 2868.

To hit the ball, the Wii remote is swung as an actual golf club would be swung. There is a meter to measure the strength of the shot. If the player hits the ball harder than the meter measures, the ball will not go straight. The dots on the meter are also represented on the minimap of the hole, which allows the player to determine the ideal force to use on the ball.

There are three difficulties, with three holes each: beginner, intermediate, and expert. Each difficulty can be played separately, or all nine holes can be played at once.

When the player is near the green, pressing 1 will toggle eye-level camera mode, and pressing 2 will toggle height indicator colors on the green.

Golf is playable with one to four players. Similar to Bowling, there is no minimum number of players, and solo rounds are possible. Therefore there are no CPU players at all. If multiple people are playing, the player farthest from the hole goes, after an initial one stroke for each player.

Gameplay remains largely unchanged from Wii Sports. The most noticeable difference is the addition of pointing the Wii remote downwards and pressing B before being allowed to swing. This sets a reference point for "down" in the game, making swinging the club more precise.

More golf clubs are added, for a total of 8.

In Wii Sports Club, Golf remains largely unchanged from its appearance in Wii Sports. Most modifications are cosmetic, and the only notable gameplay change is now the maximum number of strokes is par plus 6, instead of 3 times the par.

Screenshot of a Sportsmate teeing off in Nintendo Switch Sports.

The golf clubs are as follows, from strongest to weakest:

Golf features 21 courses from the Wii Sports series, and 8-player "Survival Golf". Multiple players can share one Joy-Con if playing locally, and there is also a feature where multiple players can play at the same time. There are also 2v2 team battles.

Each Golf match is either 3, 9, or 18 holes. When playing a 3-hole game, the player can choose either the Wii Sports Resort holes (Resort), the original Wii Sports holes (Classic), the 3 new challenge holes, or a random mix of any 3 holes. When choosing the Resort or Clasic holes, the player is given the option of the first 3 (beginner), middle 3 (intermediate), or last 3 (advanced) holes. When playing a 9-hole game, the only options are all of the Resort holes, all of the Classic holes, or a random 9 holes. An 18-hole game is always the Resort and Classic holes in order, respectively. Each hole is given a unique number. The Resort holes are 1-9, the Classic holes are 10-18, and the new Challenge holes are 19-21.

Golf remains largely unchanged from its appearances in Wii Sports and Wii Sports Resort. The most noticeable changes are graphical. All of the holes now have golf carts and tents set up in the background.

Unlike in previous games, the putter is not selectable a certain distance from the green, and only the putter may be used while in the green.

Like in Wii Sports Resort, the player's stance must be set before swinging, and can be rest anytime.

A new addition to the swing is the wrist tilt. Tilting the Joy-Con before swinging will change the angle that the ball flies, adding a new aspect to gameplay. The swing meter bends to reflect the tilt of the Joy-Con. The wind speed is now displayed on the hole map.

It has been requested that image(s) be uploaded and added to this article. Remove this notice once the image(s) have been uploaded and applied.
Reason: putter, holes 1-9, holes 19-21, multiplayer and online