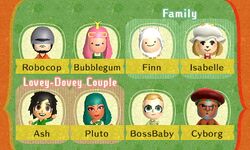 It has been requested that image(s) be uploaded and added to this article. Remove this notice once the image(s) have been uploaded and applied.
In-game screenshot not from the cast menu

The Sassy Child is an energetic kid who lives in Greenhorne Town. He runs in circles next to his mother. His face is stolen by the Dark Lord and placed on the Mini (Sassy Child) slime in the opening of the game. His face is the first to be saved. He later leaves town and must be saved from monsters by the player when the Besmirched Noble's Son fails to save him.