From MiiWiki
(Redirected from Friendship)
Jump to navigationJump to search 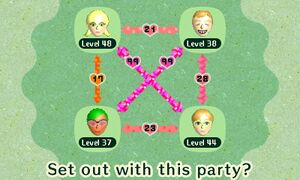 Relationships are a mechanic in Miitopia. It can be raised through several methods, including events, using healing moves, assists, personality quirks, staying at the inn together, certain job skills, and Jolly Jaunts/Outings. The Horse can be bonded with as well. Relationships are used to unlock assists. A relationship increase is signified by a meter shaped like a heart appearing with the faces of the two Miis. If the meter fills up, the relationship level increases by one and the Miis enter a looping animation. If a new assist is learned, it is displayed here as well. Relationship levels increase from level 1 to level 99.

Certain events can raise resentment, which is signified by a blue icon appearing by a Mii. Resentment can be one-way or two-way and overrides all assists. Resentment can be removed by putting the Miis in a room together in the inn or by a random inn event exclusive to Miis that have resentment. The level of resentment is signified by a wavy meter that is maxed out when resentment is triggered and steadily decreases if the Miis are in the same room at the inn and completely empties if the inn event activates. Resentment causes in-battle effects similar to assists, but are mostly negative.