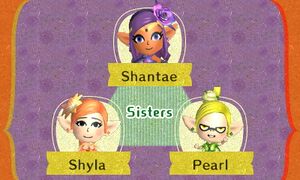 The Youngest Fab Fairy in the cast screen (bottom right).

The Youngest Fab Fairy is an NPC in Miitopia who lives in the Elven Retreat with her two sisters. She joins the party to help rescue the middle sister, using the elf job's standard attack and Dancing Arrow skill, and leaves the party after defeating the Arachno(Middle Fab Fairy), and her face is later put on the (Youngest Fab Fairy) Frog. She will later randomly show up in the Travelers' Hub, offering an escort quest with a sweet treat as the reward.