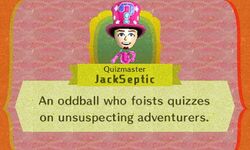 The Quizmaster in the Cast screen.

It has been requested that image(s) be uploaded and added to this article. Remove this notice once the image(s) have been uploaded and applied.
in-game screenshot

This section is incomplete. You can help MiiWiki by expanding it.
names, ✓ or ✗ for removing makeup, I feel like there are more [needs verification]